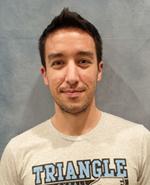 Gioles grew up in Long Island, NY playing a variety of sports including volleyball (setter). He attended and played 4 years of college tennis at Farmingdale State College in New York earning a Bachelor’s Degree in Business Management (2011).

Following his degree, Gioles’ passion for fitness and sport performance led him to pursue a career in Personal Training. He is certified through the National Academy of Sports Medicine (NASM) with additional specializations in Performance Enhancement, Corrective Exercise, and Youth Athletic Performance, His first role as a trainer was at Robbie Wagner’s Tennis Academy (Glen Cove, NY) in 2011. He became the Head Fitness Coach in 2015.

Gioles moved to North Carolina in September of 2016 and served as a Strength and Conditioning Coach at The Performance Academy (TPA) in Apex for 2 years. Gioles also coached tennis at Cary Academy (MS Boys, JV and Varsity Girls) and started his own personal training business specializing in Youth Athletic Development. In 2020, Gioles became the Director of Sports Performance at Prestonwood Country Club where he currently works with many volleyball players as well as athletes from other sports.

Gioles coached Triangle Boys 14-Blue team during the ‘21-‘22 season and will begin his role as Triangle's Lead Strength and Conditioning Coach.

In his free time, Gioles plays ice hockey, competes in golf tournaments, and volunteers his time to local military veterans as a hockey coach for the Carolina Hurricanes Warriors Ice Hockey Program. Gioles lives in Holly Springs, NC with his wife Sarah and their cat Gryffindor.