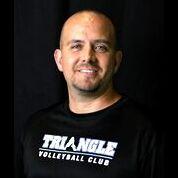 Webster joined Triangle in 2015 with significant coaching experience at the club, high school, and collegiate levels. Webster and his family came to Raleigh from Atlanta, where he coached with A5 Volleyball Club and Mount Pisgah Christian School. At A5 he coached the 15-1 and 12-2 teams during his five years with the club, and guided the 15-1 team to USAV Nationals all four seasons as the head coach, including two Open bids and six tournament titles.

At the collegiate level, Webster spent time as an assistant coach at the University of Conneticut, the University of Central Florida, and Ohio University. Webster served as the head coach for Georgia State from 2004-2009 helping his student-athletes to experience success both on and off the court. His work to improve his team resulted in six players receiving all-conference accolades, one taking home conference all-tournament honors and seven player of the week honors as well as 19 student-athletes earning conference all-academic honors a total of 33 times during his six seasons as head coach.

In college, Webster was a four-year collegiate club player at the University of Maryland while studying psychology and sociology. He went on to earn a Master's degree in physical education athletic administration from Ohio University. Webster is USAV CAP I and II certified.

Currently, Webster is the Head Coach at Apex High School and has led the Cougars to the NCHSAA playoffs every season during his tenure. Webster and Apex reached the fourth round of the state playoffs in 2017. He has been the head coach of Triangle 14 Black since 2016 and worked as a positional training lead coach with setters. He lives in Apex with his wife and two sons.