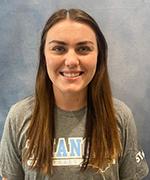 Originally from Chicago, Kelly Hogan brings a wealth of experience from both the college game and the elite club environment. Hogan most recently served two years as an Assistant Coach with Georgia Southern University where she primarily worked with setters and defensive specialists. Prior to her time at GSU, Hogan served as an assistant coach at UNC-Asheville and a volunteer assistant at the University of Tennessee where she gained considerable experience as a technician and recruiter.

Hogan played club at Sports Performance Volleyball Club [SPVB] (Aurora, IL) from 12s-18s and began her coaching career working full-time for SPVB. At SPVB she served as a team head coach and also worked in their College Prep, Scholastic Prep, Youth Academy and VolleyTots programs. She has also coached as both a master and team head coach at Xcel Volleyball Club in Hendersonville, NC during her time at UNC-Asheville.

As a Division I athlete, Hogan served as a two-year captain and outside hitter for University of Tennessee-Martin. While at UT-Martin Hogan was named to the Ohio Valley Conference (OVC) Commissioner's Honor Roll as well as to the school's Dean's List. Hogan graduated from the University of Tennessee at Martin in 2013 with a bachelor's degree in health and human performance.

Kelly and her fiancé Tyler are building their first home in the Four Oaks area and plan to get married in October, 2021. She is the adidas Volleyball Specialist at 431 Sports and is a Rodan + Fields consultant.