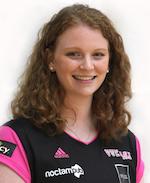 Slay returned to Triangle in 2017 where she played club her sophomore through senior years. She was a member of the 18 Black team that "double-qualified" for USAV Junior Nationals in the Open Division by finishing second at the Mideast Qualifier and winning the championship at the Lone Star Classic. Slay was a four-year varsity letter winner and two-year captain at Wakefield High School in Raleigh where she was named Cap-7 All-Conference and Cap-7 Academic All-Conference three times. In 2009 she was named Cap-7 Conference and News & Observer Volleyball Player of the Year. She was also nationally recognized as a First Team AVCA/Under Armour award winner and prepvolleyball.com High School All-American in 2010. Slay was selected to the USA Women's Junior National Team her sophomore and junior year and won the NORCECA Continental Championship U-20 in Saltillo, Coahuila, Mexico.

Slay was recruited to Penn State University where she and the Nittany Lions won the NCAA Division I National Championship in 2010 and 2013. During Penn State’s national championship run her freshman year, Slay posted her career-best attack percentage of .700. As a sophomore Slay was named AVCA Second Team All-American, AVCA All-Mideast Region, Big Ten Defensive Player of the Year, First Team All-Big Ten, and Academic All-Big Ten. Her dominance on the court continued her junior year when she was named AVCA Second Team All-American, Volleyball Magazine Second Team All-American, AVCA Mideast Region, All-Big Ten, and Academic All-Big Ten. Her senior year saw the Nittany Lions grab another national championship and Slay being selected as the Capital One Academic All-American of the Year. After graduating from Penn State in 2014 with a bachelor's degree in communication sciences and disorders, Slay played two years professionally on the international circuit; Dresdner Sports Club 1898 in Germany and Vannes Volleyball in France. Slay returned to the United States to pursue her education and dream of becoming a speech therapist. In May of 2018, she graduated from East Carolina University with a master's degree in communication sciences and disorders.

For the 2018 season, Slay assisted 13 Black and has served as a lead at summer camps and clinics. Slay currently lives in Raleigh.