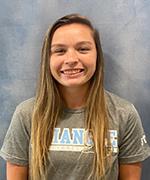 McCullough (fondly referred to as "Katie Mac") is a Triangle alumnae having played in Triangle blue for 5 years beginning at 14s through her senior year. McCullough was a two-sport athlete in high school finding success both on the volleyball court and the soccer field. McCullough, an outside hitter, was part of Triangle’s 18 Blue team who in 2015 ‘double qualified’ for USAV nationals by finishing third in the USA division at Big South and going on to win the USA division championship at Disney Volleyball Showcase (aka Sunshine Qualifier). When all was said in done, 18 Blue ended their season ranked among the top 100 18s teams in the country.

McCullough went on to have a successful collegiate career at UNC-Wilmington. As a freshman she played in 25 matches finishing with 149 kills and helped the Seahawks earn a berth in the NCAA Division I tournament. Her junior year McCullough transitioned to libero and her senior year she was named CAA Defensive Player-of-the-Week and set a school record with 4.51 digs per set. She remains sixth on UNC-W’s all-time digs list with 1,138.

McCullough’s success followed her to the sand where she represented the Seahawks all four years on the beach. She played in every dual match during her four-year career and was named UNC-W’s Defensive Beach Player-of-the-Year in 2017. With 50 dual victories during her beach career, McCullough ranks first all-time for wins for the Seahawks.

After graduating UNC-W with a Bachelors of Science with a concentration in finance in 2019, McCullough attended Tusculum University where she served as the Graduate Assistant Beach Coach while pursuing her Master’s degree in Sports Administration (August, 2020).