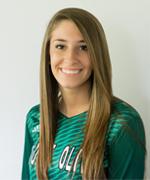 Johnson, a Triangle alumna (2014), is joining the Triangle staff after graduating from the University of Mount Olive with a Bachelor's Degree in Recreation Therapy . A four year starter at UMO, Johnson's accolades include All-Conference recognition, multiple Conference Player of the Week awards, as well as multiple Student-Athlete of the Week awards at the university. She was named MVP in 2015 and was the recipeint of the DII ADA Academic Achievement Award. Johnson earned Academic All-Conference Recognition in each of her four seasons.

In high school, Johnson was a standout athlete at North Raleigh Christian Academy, earning MVP honors in back to back seasons, being named to the 2011 NCISAA All-State team, and being named 2011 TISAC Player of the year.

Johnson is excited to rejoin Triangle as a staff member and hopes to pass along the valuable lessons she learned as an athlete. She has worked with multiple camps and clinics this summer and is looking forward to working with a team in the 2019 club season.

"The discipline I learned at Triangle helped me balance athletics and academics throughout my college career and now is key as I enter the work force. I'm looking forward to helping student-athletes develop the on-court skills they need to prepare them for collegiate journey. Triangle was such an integral part in helping me prepare for success and I hope to become part of the process that helps young people better themselves through a sport I love."

Johnson is currently an instructor at the Mariposa School and resides in Durham.