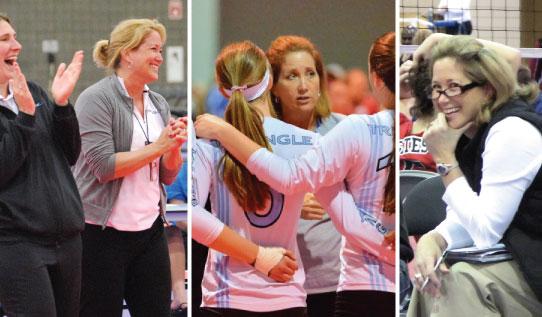 Coach Robin Bugg was selected to receive a USA Volleyball Youth Junior Olympic Volleyball Division [YJOVD] service award for significant contributions made coaching junior club volleyball.  Bugg's resume is impressive with over twenty years of coaching experience at the middle school, high school, club, and collegiate levels.  She has served as head coach for high school programs in Texas, Utah, and West Virginia and has 16 years of experience coaching club.  The 2014 season marks her seventh year on staff at Triangle, serving three years as the head coach of 18 Black, and most recently as the head coach for 17 Black.  Her 2010 18 Black team became the first team from North Carolina to "double-qualify"  for the prestigious 18 Open division at Junior Nationals with a second place finish at MEQ and the championship at the Lone Star Classic.  That team under her leadership earned a T-15 finish in Open at USAV Jr. Nationals.  In 2011 she led 18 Black to a third place finish at the Big South National Qualifier, qualifying for a second consecutive year.  At nationals 18 Black finished 13th in the Open Division - the highest finish of any Open team in North Carolina history.  In 2012 Bugg led Triangle 17 Black to win an Open bid at the Lone Star National Qualifier by placing 4th in the tournament.  This was the first-ever Open bid at the 17s age group in both Triangle's and North Carolina's club volleyball history.

From 1992-2000, Robin served as co-director and head coach for the North Dallas Juniors Volleyball Association.  During her time with North Dallas, she helped over 80 student-athletes earn athletic scholarships and won several North Texas Region and Tour of Texas Championships.  In total Robin has made 13 trips to the USA Junior Olympic Volleyball Championships as a coach.

As a middle blocker and three-time team captain with the University of Tennessee (1980-1983), Robin led her team to two SEC championships and three 9th place finishes at the NCAA tournament.  The three time All-SEC selection still holds several records at her alma mater, including career aces, career blocks, and most blocks in a match.  Robin was inducted into the Lady Vol Athletic Hall of Fame in 2005.

"Without question Robin has achieved tremendous success on court" stated Triangle's Executive Director, Sherry Fadool.  "It is Robin's ability to manage the delicate balance between driving an individual's and teams' performance and guiding and mentoring athletes to be young people of strong character, kindness, and good citizenship that makes her uniquely qualified for this award."  Fadool adds, "To be certian, Robin's influence extends beyond our athletes to the entire coaching staff who look to her for technical guidence, competitive experience, and coach mentorship."